An American in Paris

After having served for three years as the US ambassador in Paris, Craig Stapleton leaves behind him, in our country, many friends. Visiting every corner of our provinces, meeting people on all occasions, he was passionate about fine dining and good wine. A few days ago, our former president Valéry Giscard d’Estaing presented him with the cross of Commander of the Legion of Honour, in the presence of the new ambassador, Charles Riskin and of numerous French officials. It was for VGE (as we call him for short), an occasion to once again showcase his astonishing oratorical and educational talent and to put it at the service of a brilliant historical epic of the Franco-American History. Wine people that Craig had met during his three years in office came in numbers to the ceremony: from Bordeaux came the dashing 90-year-old Thierry Manoncourt with his wife Marie-France, Corinne Mentzelopoulos, the young Philippe de Rothschild... from the Rhône Marcel Guigal, the young Jean-Louis Chave, and the charming Laurence Féraud from Domaine du Pegau. Others I’m sure, whom I forgot… 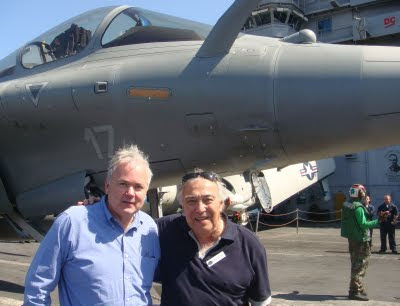 Last year, the “Harry S. Truman”, the largest aircraft carrier in the world, was cruising the Mediterranean sea on her way to Norfolk. Craig Stapleton invited me to share a day of the 5700 crew members: landing in, catapulting out…I owe him one of the great experiences of my life… and some thrilling moments.
In Paris and in the French provinces, he was an efficient and very appreciated diplomat during a period of somewhat tricky relations between France and the United States.
He knew how to break down the barriers and made friends with many. Now back in his country, I have no doubt he will be, at a time when our American market is staggering a little, a convincing ambassador and a faraway friend for all the wines of France.
Posted by Jean-Michel Cazes at 17:41 42 comments:

All roads lead to Bages...

There’s rumour going round the village… it’s action stations! at Café Lavinal: seated at the bar for a light lunch and a glass of good wine is a certain “Pink”, whom I have to admit to my great shame I had never heard of. Google, help !… I discover the young lady’s identity : Alecia Beth Moore, from Doylestown, Pennsylvania. She is a singer by trade, obviously a real super-star, and is visiting the Médoc accompanied by her husbandCarey Hart, tattoo king and motocross champion, whom she met in Las Vegas and married on a beach in Costa Rica. 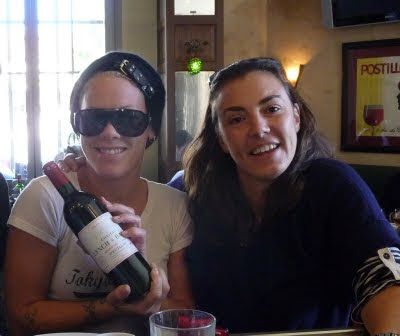 So go ahead as I did and find out more about the undisputed queen of 21rst century pop rock, who has the great idea of seeking inspiration in Médoc wine:
http://www.pinkspage.com/ 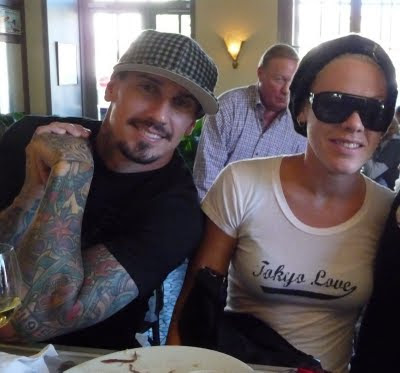 As regards Carey Hart, this well illustrated young man deserves to be better known !
Click on:
http://fr.wikipedia.org/wiki/Carey_Hart for his bio, admire him too... http://video.google.com/videoplay?docid=-951396858852588900#

Was he under the influence of some grand cru ?

Even more so than the Perpignan train station, dear to Salvador Dali, Bages will soon be the center of the world !

Posted by Jean-Michel Cazes at 17:43 No comments: 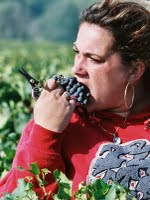 Now that the new harvest has been lying safely in our vats, the vinification process now begun, I can yield to custom and provide a first glimpse of our just completed grape harvest. Neither particularly early nor late, it was aided by the fine weather. I could inundate you in dates, figures and more or less technical considerations on the maturity of the different grape varieties etc. Instead I’ll get straight to the heart of the matter:
The actual picking of the harvest (9 and a half days at Lynch-Bages, 11 days at Ormes de Pez), was spread over a period of 18 days, between 23 September and 10 October. When vatting, the musts of the red grapes were rich in sugar and the potential sugar content averages high, the highest in 50 years (at least!): 13.3% at Lynch-Bages and 13.2% at Ormes de Pez.
Something I’ve never seen before in my life… Right from the first hours of fermentation we noticed highly promising colours and analytic structures, where tannins and acidities seemed to balance each other nicely. Yet another great year… If I say any more, I’m afraid noone will believe it!
Posted by Jean-Michel Cazes at 18:54 1 comment:

Wine, the only time machine
that really works 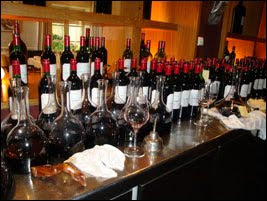 It’s always interesting to see how old wines behave, to assess their resistance against the passage of time or to witness their maturity. It’s also a rare opportunity to be able to take a sounding, to get a fix on a vineyard’s profile at a given point in time, to reveal underlying trends, to analyse the consequences of intervening changes over a long period in the vinification or cultivation techniques and to measure their impact on the wine with hindsight.
I can’t resist the urge to share our last great tasting with you: 33 Lynch Bages vintages, from 1959 to 2006. It was last Tuesday, after bringing in the Merlot harvest and before the Cabernets.
The wines were served blind, in flights of five and beginning with the oldest vintages. In each flight, the tasters knew the five vintages being served, but not the order in which they were presented. It’s a system I quite like, as it protects the anonymity of the vintages while maintaining a certain progression in the tasting order. Guaranteed surprises…
It was a wonderful day. It showed us that thanks to its terroir and the quality of its grapes, Lynch-Bages gives birth to wines of great consistency and possessing a highly distinctive style of their own. One participant in the tasting found that the terroir, because of its intrinsic quality, somewhat erased the vintage effect. Indeed, we were all struck by the resilience of some years considered to be minor or fairly average: 1984, 1987, 1993 etc. to cite but a few, which are drinking wonderfully today. And yet, despite everything, the great vintages remained great vintages. The 1959, 1989 and the 2000 were the three years in this lovely flight that have peaked for me.
I would very simply add that the emotion I have for these wine tastings as they were developed in their time by my grandfather, my father or by the team I brought together beginning in 1974, brilliantly led by Daniel Llose, moreover is a living part of the tasting. This was a time for us to share our memories, our satisfactions as well as the problems we’ve had to solve. Looking back, we realised how many things, from the vine to the wine warehouse, are now better managed, better understood, and how advances in modern viticulture and oenology have facilitated our work.
The style of the wines came shining through. Vinified by my grandfather, Jean-Charles Cazes, the Lynch Bages wines distinguished themselves very early on by their deep colour, their ripe tannic structure and their hedonistic character, at a time when wines were often presented as more austere. The vintages vinified by André Cazes (notably 1966 and 1970) and later on by the team I had formed with Daniel Llose, will serve to confirm this style. Thanks to the advice of Emile Peynaud, the style became more refined in the 70s. The wines increased in their suppleness and roundness. From the 1980s to today, Lynch Bages wines show a remarkable consistency. They confirm, vintage after vintage, the hedonistic character that made their reputation.
By clicking on http://www.farrvintners.com/blog.php?blog=26, you can see the tasting notes of Stephen Browett, of Farr Vintners. I thank him for having taken the trouble to write them. They are complete and detailed. Even if on some points they diverge somewhat from what I might have written, they closely resemble my own assessments and well reflect the overall impression of the participants.

Posted by Jean-Michel Cazes at 12:07 No comments:

In Médoc, October is a time for getting together. The traditional harvest lunch at Léoville for which Eva Barton was the perfect hostess, was a chance to make new friends and see old faces. And this lunch was no exception. Next to Anthony, more the gentleman than ever, I had the delight of seeing Daniel Lawton, the wine “courtier” of Bordeaux, May-Elaine de Lencquesaing, coming direct from Stellenbosch for the occasion and Thierry Manoncourt, who had made the long journey from his Figeac estate in Saint-Emilion.

Side by side, the five of us have experienced the past 40 years of the Bordeaux wine scene, 40 phenomenal years that have seen more changes in our craft than the two preceding centuries combined. Our professional lives have run in parallel. We have each known the same joys, the same difficulties and probably at times the same moments of discouragement. And we also know that we’ve had the great luck to find ourselves in the right place, at the right time. Through it all, none of us has swerved from his or her path. Deep in our hearts, we are happy to have contributed, each in his or her own way, to the renewal of Bordeaux wines and to their success the world over.

What happened to molecular Cuisine ?

We have completed our merlots. The cabernets will be spending a few more days beneath an October sun. Yesterday, at the conclusion of a memorable vertical tasting, we gathered a few friends to meet for some vendange cuisine. Our cook Isabelle had got some beautiful cepes that very morning. 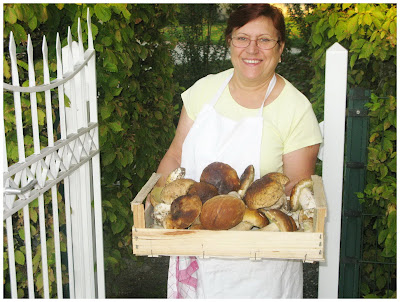 Dried on a bed of vine shoots then cooked à la bordelaise, with a little parsley and shallot, they accompanied the legs of lamb that Milou had patiently been twirling at the end of string over the glowing embers of vine stumps and shoots. With, of course, as tradition demands, a few green beans to lend the meal some légèreté…
And some Lynch-Bages 1990 and 1985… poured in moderation.
Happiness, simple and rare, just like the truly good moments in life!
Posted by Jean-Michel Cazes at 14:45 1 comment:

The sky's the limit 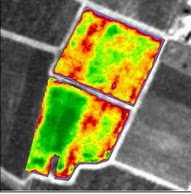 Satellite photography offers the vigneron a new tool for grape selection. An unexpected but fruitful encounter of 21rst century space technology and a 1000s year old trade.
This photo of a Lynch-Bages parcel was taken this summer by a camera circling the globe on satellite FORMOSAT-2. With an astonishing precision, it shows the “vigour” of the vine, a factor we were able to correlate with grape ripeness as measured by classical sampling. To make it simple : the more red, the riper. Getting into the green, wait a litle...
Obviously this new tool can be of great help in optimizing harvesting, which can now be organized, not by entire parcels, but rather by zones within them. It allows a finer planning that follows closely the actual fruit ripeness.
Of course the preparation work as well as the actual picking is a lot more complex and more demanding.
Posted by Jean-Michel Cazes at 18:54 1 comment: